In March 1967 Ramparts magazine published Sol Stern’s important essay “NSA and the CIA: A Short Account of International Student Politics and the Cold War with Particular Reference to the NSA, CIA, etc.” 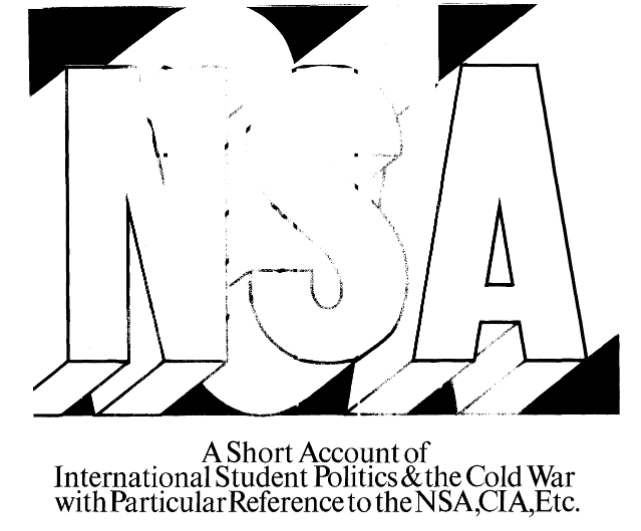 The following two short pieces “An Epilogue…” (by Michael Wood) “…and a Judgement” (by Marcus Raskin) were published directly after Stern’s essay.

THE DECISION to tell this story was the most agonizing of my life. Phil Sherburne, whose personal trust I have betrayed, was a close friend. Though we disagreed on many subjects (espe-cially on how to handle the CIA), in seeking to terminate NSA’s relationship he acted with a dignity rare among those who knew the facts.

Moreover, I still believe in NSA, and deeply respect the progressive stance it has taken among American students for 20 years. Yet the issues involved are larger, and my public trust as a citizen of the United States must transcend my private trust.

For years the United States National Student Association has stood for “a free university in a free society.” Its resolutions on academic, political and social freedoms are clear. Its constitutional commitment to free and open democracy is of long standing. Its defense of civil liberties has been staunch and consistent. Yet because of NSA’s relationship to the CIA, its leaders have for 15 years undermined those principles.

This story is only a case study in CIA corruption. When I was told of Covert Action No. Five’s infiltration of NSA, I was also told of numerous other organizations similarly infiltrated. A few have been named in this article; many others have had to be omitted. In an age when the average man’s only access to the centers of decision is through private institutions, the responsiveness of those institutions to his wishes is critical to the healthy workings of a democracy. The spectre of CIA infiltration of domes-tic institutions—and the covert creation of coordinated leadership among them—must horrify those who regard unfettered debate as vital to representative democracy.

Those of us who worked for NSA during 1965-66, experienced an unusual sense of personal liberation. While actively involved in many of the insurgent campus and political movements of the day, we were also able to move freely through the highest echelons of established power. If those who occupied the command posts didn’t always sympathize with our goals, they listened nonetheless and were sometimes affected. We felt like full citizens, able to move freely without compromising our principles. It gave us a heady feeling and a sense of power beyond our years.

The mobility and influence was as it should be for a national union of students; to learn that it had been bought with so terrible a compromise made me realize how impotent we really were.

Because of the pain involved in public discussion of so sensitive an issue, I have often wished that I had never learned the truth. Yet to avoid the truth, however painful, would be irresponsible.

There have always been staff members of the international commission who were entirely unaware of the relationship. It is unfortunate that all of them could not be protected, and that many of them may suffer the onus of NSA’s guilt. I should like to note, however, that Gregory Delin, Gilbert Kulick, and Marcia Casey were in no way aware of the relationship. I am similarly sure that Mrs. Isabel Marcus Welsh, international affairs vice president in 1959-60 had no knowledge of the CIA’s presence in NSA.

For those individuals in NSA who—like myself for a time—knowingly allowed themselves to be part of the relationship with the CIA, the worst consequences are internal. Very few staff members so involved were callous Cold Warriors who cynically appreciated their work with the CIA. Most of them, rather, were deeply committed liberals, whose consciences had no rest while they served two masters. All of them, I am sure, have at times felt horribly trapped in the conflict between their actions and their liberal principles.

Perhaps worst of all is the everyday dishonesty, the need to clam up when in the presence of “non-witty” staff members, to fudge, to make excuses and deflect embarrassing questions. Perhaps a professional intelligence operative, who sincerely believes in anti-communism at any price, can learn to suppress with not too much damage that most basic instinct of youth—to be open, frank, questioning of all things, in communion with his friends. But for the typical NSA staff member, part of a generation whose instinct is to unmask hypocrisy, the compromise comes very hard indeed. Many of them have suffered as a consequence the most agonizing sort of emotional schizophrenia—part of the human toll in an otherwise impersonal and cynical international intelligence operation.

IN SIMONE DE BEAUVOIR’S roman a clef, The Mandarins, there is a passage where the State Department tries to “help” Henri Perron (supposedly Camus) by offering him newsprint if his journal holds to an independent, neutralist line. Perron construes the offer to mean that the magazine should not criticize the fundamental methods of American foreign policy, and turns down the “aid.” To protect the magazine’s independence he also turns down aid from communist sources. But the gods play with men and their ideals. For a period of time the magazine receives its funds from a man who took gold from dentists who collaborated with the Nazis. Living in the world makes it hard to avoid dirty hands, perhaps because we are egocentric and overvalue the work we do. When we try to bring our projects into being they become more important to us than the reason we initiated them.

For example, it is not written in the Torah or the Constitution that educational institutions had to become fronts for the government, places where the rhetoric for the Cold War is supplied and the equations and technology for hydrogen bombs are manufactured. Nobody forced them into this position. Nor did the small, cliquish groups who ran the National Student Association have to take money from the CIA. Perhaps 15 years ago it was easier that way. For the young college graduate who was a “student leader” there was nothing quite as flattering as being approached by the CIA to help in the National Effort. Furthermore, it was the way up the status ladder, to success, travel, excitement, money, and government or foundation jobs. By following that road the student leaders of my generation—a decade ago—played it safe. As a result, they became instruments of the Cold War.

I have tried to figure out why the CIA would bother attempting to get to American students. After all, it takes a good deal of trouble and expense to set up front organizations and all the other tools that used to be the monopoly of the communists. The best way to understand the CIA’s motives is to see it as primarily a commercial institution which deals in buying, renting and selling people.

Yet after we examine the CIA’s motives and purposes, we are left with Cold War wreckage as serious and immoral as the Bay of Pigs operation, the U-2 overflights, or the Guatemalan caper. We are left with the fact that one generation attempted to corrupt the young by paying them off, buying and renting them on the installment plan. (Now that there is a crack in the door isn’t it about time that we have a public accounting of CIA funds? How much of that loot sticks in the pockets of the CIA operatives themselves?) We are left with the fact that the CIA made patsies out of thousands of young Americans who went abroad to conferences or who studied under NSA auspices, but who unknowingly were being paid for, and were used by the CIA as contacts, covers and mail drops. Furthermore, how do we now face other nations who took us at our word that our students were “free” and therefore different from the communist-run youth groups? The CIA owes an apology to the innocent college students of this last generation.

View all posts by mbarker2012

“At a time when philanthropy is being upheld as a panacea for inequality, Barker’s erudite and compelling book offers a vital corrective to the belief that voluntary gifts from the mega-rich can resolve the very global inequities which their business practices often perpetuate.”
—Linsey McGoey, author of No Such Thing As a Free Gift: The Gates Foundation and the Price of Philanthropy